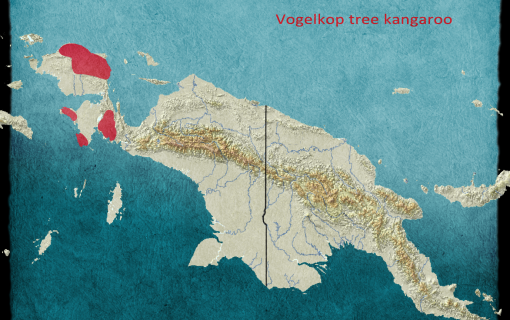 This is the island of New Guinea,

where 12 of the 14 species of tree kangaroos live. The other two (Bennett’s and Lumholtz’s) live in far north Queensland. If you look closely, you’ll see a black line running pretty much straight down the middle of the island. The left hand side of New Guinea is called Irian Jaya and is part of Indonesia. The right hand side is Papua New Guinea.

As you can see, some species of tree kangaroo are very rare and only found in small areas. Most of us live high in the mountains in the cloud forest, so it’s a good thing New Guinea has a very high mountain range running through it.

In case you’re wondering, I’m a Golden mantled tree kangaroo which is the rarest one of all (except for the Wondiwoi but no human’s seen that fellow for a very long time, so most people think it’s extinct. Or fast asleep somewhere.)

However, most people don’t have the time to jump on an aeroplane and head over to the cloud forest. So, I’ve put together a little list of where you might find some of my cousins (sorry, no Golden-mantled’s in zoos yet) a little closer to you.

Where can I see a tree kangaroo?